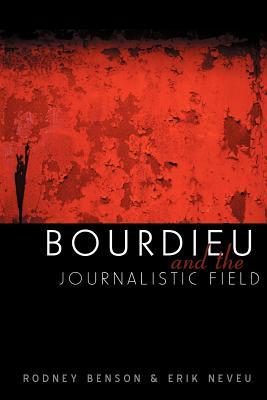 BORDIEU AND THE JOURNALISTIC FIELD

Find the book at:
— Amazon.com

Bourdieu and the Journalistic Field is an exciting new text which builds on and extends Pierre Bourdieu’s impassioned critique of our media-saturated culture. Presenting for the first time in English the work of influential scholars who worked with or were influenced by Bourdieu, this volume is the one and only book for Anglophone scholars seeking a more detailed elaboration of field theory in relation to the mass media.

In his short book ‘On Television’, Bourdieu provided a powerful critique of the ‘journalistic field’, but what exactly does he mean by this? How does the journalistic field relate to external economic and political pressures? And what kind of autonomy can, or should, journalists expect to maintain?

Such questions are taken up in case studies of such diverse phenomena as media coverage of the AIDS-contaminated blood scandal in France, U.S. youth media activism, and political interview shows on both sides of the Atlantic. Chapters by both American and French scholars also demonstrate methods for measuring field autonomy and spatially mapping journalistic fields, or discuss the similarities and differences between field theory, new institutionalism, hegemony, and differentiation theory. Rejecting all forms of dogmatism, the authors in this volume demonstrate why field theory remains a “work in progress,” and indeed, a research paradigm whose promise has only begun to be tapped.

“The French sociologist is already making a significant impact in media studies and his approach, as illustrated in this volume, represents one of the most sophisticated sociological approaches to journalism research.”
— British Journal of Sociology

“These excellent detailed studies, when combined with a very clear introductory essay by Benson and Neveu, and an accessible, previously untranslated 1995 lecture by Bourdieu himself make this without question an important and useful volume.”
— Theory and Society

“A concise and thought-provoking starting point for the further scholarly and public discussion of the structural limitations as well as potential for change inherent in contemporary journalism.”
— Social Anthropology

“Bourdieu and the Journalistic Field places journalism squarely back in the sociological imagination. Deftly examining the intersections journalism cohabits with politics, economics, education, and activism, it uses the work of Bourdieu to consider journalism as a sociological phenomenon. Required reading for those who want to better understand modern journalism in complex societies.”
— Barbie Zelizer, University of Pennsylvania

“Timely and informative, this book builds a valuable bridge between social theory and journalism. Bourdieu opens up analysis of the journalistic field, but the contributors to this volume also improve our understanding of how to put Bourdieu’s sociological approach to work.”
— Craig Calhoun, New York University

“The book is a valuable contribution to the formation and development of the field theory of journalism.”
— Anna Horolets, Warsaw School of Social Psychology