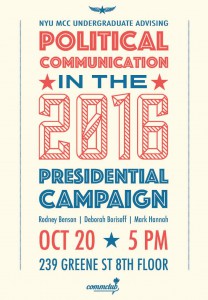 Last night, I had a great discussion with colleagues Deborah Borisoff and Mark Hannah and NYU students about the 2016 presidential campaign. I analyzed the campaign drawing on the interesting ideas of Jeffrey Alexander about the “cultural binaries” of civil society discourse. It seems clear that Trump’s image or brand has been strongly “polluted” (to use Alexander’s language) with the anti-civil/anti-democratic side of the binaries: irrational, hysterical, excitable, wild-passionate, distorted, mad, deferential (to foreign powers), conspiratorial, antagonistic, arbitrary, power, and hierarchy, to name the most clearly applicable. Clinton could be fairly labeled on the negative side with “calculating.” After all the back-and-forth attacks, both now are associated with terms like “secretive” and “self-interested.” Otherwise, Clinton – at least in the contrast with Trump – is starting to own positive civil/pro-democratic terms like: rational, reasonable, calm, self-controlled, realistic, sane, deliberative, rule-regulated, law, equality, and inclusive. In Alexander’s framework for analyzing politics, Clinton has enacted a far more “successful political performance” than has Trump (see Alexander, Performance and Power, Polity, 2011, p. 101). Whether or not that translates into a victory at the polls will depend on the efficacy of her GOTV (Get out the Vote) in the remaining few weeks.