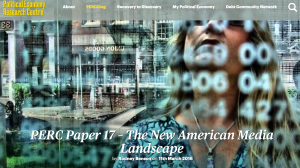 I was recently invited by my colleague and friend Aeron Davis to write something on U.S. media for his Political Economy Research Centre (PERC) website, hosted by Goldsmiths University of London. It’s the final paper in their Economics of Public Knowledge series. All of the papers are in the process of being published in a forthcoming book. More on that later. Here is how I start the paper:

“US journalism has taken a fresh turn in recent years. A small group of major digital commercial and nonprofit news ventures seem to be here to stay, and they are providing real competition to the still dominant legacy media outlets. New and old media alike are creating new forms of civically valuable journalism, but in the shadow of increasingly concentrated and opaque economic wealth.”

And here is my conclusion:

“What will be the end result of the American experiment in hyper commercialism and philanthropy? While there are some bright spots, a number of problems loom on the horizon for American news media.

If current trends hold, full-time professional journalism will continue to be downsized. The tens of thousands of journalists being laid off at major legacy news organizations are not being replaced by the trickle of new jobs at digital and nonprofit news organizations, not even close.

Digital-only commercial media are subject to even greater commercial pressures than their legacy predecessors were, as advertisers gain greater control over the editorial process via native advertising. The only escape from advertiser control seems to be increased reliance on reader contributions and subscriptions, which tend to favor high-income demographics and ultimately wall off most people from the promised civic and cultural benefits of the Internet.

As a whole, the US media system – increasingly privately-held or foundation-funded – seems to be moving back toward the corrupt and agenda-driven media system that prevailed in the US and most of Western Europe prior to World War II, and probably still is the global norm. In this kind of system, global oligarchs accept less than maximal profits in exchange for the obvious publicity – and silencing – power of the media. This doesn’t mean there won’t be quality journalism anymore. But there are clearly limits, and as economic power becomes increasingly concentrated, these limits will degrade the quality of democratic life. Any media reform worthy of the name will need to address these new challenges.”

Here is another excellent PERC paper by Toril Aalberg: “Does Public Media Enhance Citizen Knowledge?” The answer is “Yes”!

And here is a related very recent paper I’ve written on U.S. nonprofit media: “Are Foundations the Solution to the American Journalistic Crisis?”